How to Stop Your Relationship Drama: Part 1 This is one of my most visited and popular blog/articles! Here is how it was developed by me and therapist friend, Ria Meronek. Ria was in Uganda working with the Kibo Foundation, helping to develop skills and confidence in young adults. She concluded that they needed a tool to better manage their relationship drama.

She discovered that no matter where you are in the world there are challenging relationship dynamics. She also discovered that we all want to relieve the stress in those situations. We want quick relationship advice. But advice is not as effective as a self-awareness strategy.

I recall Ria saying, “Patricia, there are few resources online that are simple and clear.” Through the wonders of Skype, we dialogued and co-wrote this work.

Print the Stop the Drama Poster! 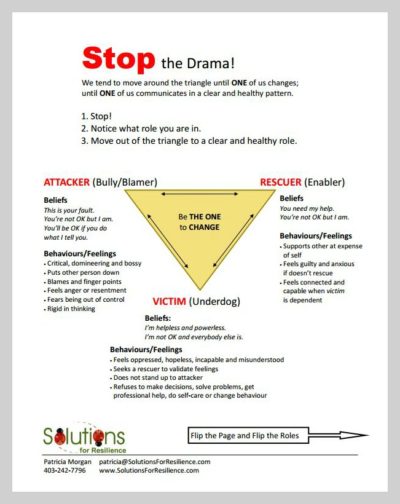 In order to strengthen the young Ugandans’ resilience and communication skills, Ria and I developed a poster guide. Help yourself to this FREE and downloadable 8 1/2 x 11″ Stop the Drama Poster.

It provides simple reminders from Stop the Drama, Part 1 and Part 2, to help you move from poor communication to self-responsible communication. It will you get out of  painful psychological game playing. Post it where you can see it, especially when you are on the phone.

Part One: The Drama Triangle

In the 1960s Transaction Analysis (TA) theory, based on the work of Psychiatrist, Dr. Eric Berne, was popular.  Berne simplified and made available to the ordinary person the work of Sigmund Freud.  One of Berne’s prodigies, Dr. Stephen Karpman, developed the drama triangle, a tool that took TA from a theory to practical application.

The model describes three unconscious and habitual behavioral habits or roles which people often play out or enact in their relationships.  It helps you to move out of relationship drama by minimizing your vulnerability to stepping into the roles of victim, attacker or rescuer. Before we explore these three roles, it helps to consider that the attacker and the rescuer fear the less desirable role of victim. However, they will inevitably end up in the land of victim. All three roles are grounded in victimhood filled with shame and guilt.

If you play one role you will probably end up stepping in and playing all three. Actually, we can play all three roles in our own head. I know I have had dramatic conversations with myself. I attack and criticize myself, feel like a victim to my own judgement, and try to rescue myself from facing the facts of my own inaction. Fortunately, I usually take a breath, realize I’m spinning around the drama triangle in my head, and step out!

1. The Victim in Relationship Drama

When a person enacts this role she believes life–through a person, condition or circumstance–is unfair to her.  This position is supported by self-fulfilling stories about injustice and negative self- talk such as, “If only X had not happened, I would not be miserable.”

Behavior may include passivity, curling into self, and slumped posture.

Ask yourself the five questions below to check how often you play the victim role:

2. The Attacker (Persecutor or Blamer) in Relationship Drama

The person, who enacts the attacker role, tries to control, criticize or bully the victim. She believes she has power over the victim.  Behavior may include bossiness, criticism, rigidity and insistence on how a problem should be solved.

Ask yourself the four questions below to check how often you play the attacker role:

3. The Rescuer in Relationship Drama

The person who enacts this role intrudes on situations professing a desire to help.  Note: This role does not refer to legitimate emergency rescuing or protecting those who are vulnerable; children, the frail, and seriously ill.

Ask yourself the five questions below to check how often you play the rescuer role:

Typically the players move around the triangle switching roles.  For example, the victim may turn into the persecutor or the rescuer might switch to attacking.

In actuality, each person is playing out his or her dysfunctional pattern. They are attempting to receive the kind of attention or control each unconsciously desires.  Think of the melodrama of a damsel in distress looking for a prince to rescue her or the poor-me grandmother desiring attention from her family or the critical father who does not feel appreciated.

Avoid pointing out to others that they have stepped into the Drama Triangle.  The best strategy is to identify the role you have fallen into and to step out of it. Remember! You can move out of relationship drama by no longer enacting the roles of the victim, the attacker or the rescuer.

Please do not stop here. Go to How to Stop Your Relationship Drama Part 2 (Click Here).

How To Break Free of the Drama Triangle and Victim Consciousness by Barry K. Weinhold and Janae B. Weinhold
Games People Play: The Psychology of Human Relationshipsby Eric Berne

How To Be A More Resilient Adult: Explore Your Childhood Wounds!
Strengthen Your Internal Locus of Control

Post Views: 16,296
How to Stop Your Relationship Drama: Part 2 How to Relieve Deep Emotional Pain

How to Repair a Relationship with a Letter

Powerful Listening Can Inspire Confessions and Save Lives

Being Blamed: It’s Hard But You Can Handle It with Grace