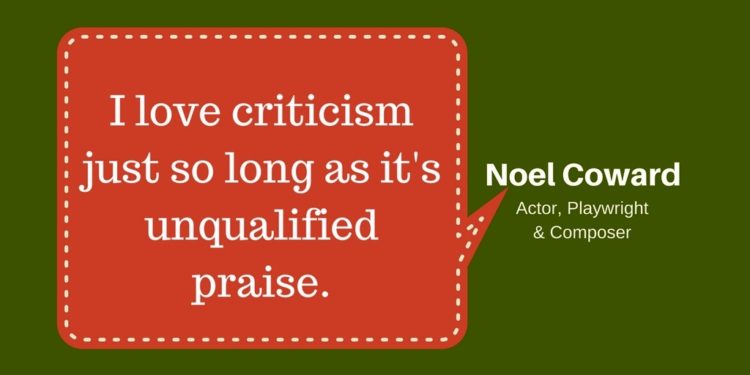 The American reporter and humorist, Franklin P. Jones (1908-1980), wrote, “Honest criticism is hard to take, particularly from a relative, a friend, an acquaintance or a stranger.” Like Jones, you may dislike receiving criticism.  Logically then, we should also be cautious about giving criticism.

I was once given twenty-seven criticisms in the guise of feedback. It took me two weeks of sucking my thumb to recover!

Criticism means the act or an instance of making an unfavorable or severe judgment or comment. I don’t like receiving it and I feel arrogant thinking it. When the severity of the judgment or comment reaches the point of name calling, insults or put-downs it has crossed into verbal and emotional abuse.

What does research tell us about the effects of criticism?

The Postmedia News release by Kim Covert was titled, Be Careful When Offering Criticism. Here are Covert’s main points:

These points are particularly true for high achievers. Harsh criticism does not improve people’s work performance!   It distracts, weakens focus and creates resentment. However, if you are in a position where you are required to give criticism and/or feedback, consider reading my post, How to Deliver Useful Information when Giving Feedback.

People with high resilience manage unwelcome criticism. They censor the criticism they both give and receive.

There are those who are totally against using any form of criticism and then there are the critical hardliners who say, “A real friend will tell you the naked truth.” Then there are people who have a critical mind and perspective. Their gift is a logical critique that forewarns of problems. They could save us potential angst and trouble. But where is the balance?

Reasons Not to Criticize

Dr. Sidney Simon developed a valuable filter or series of questions to ask before we criticize.

I would add that if you decide to give someone criticism, consider calling it feedback and ask permission first.  Ask, “May I offer you feedback for next time?” Then, respect the answer. Honour their response in whatever form–yes, no, perhaps later, I need to think about.

Maybe you are wondering about those times when you get dinged with old fashioned criticism and you did not ask for it?

1.      Take a breath, stand back emotionally and put the criticism through Simon’s filtering questions.  Then ask yourself realistically if it was fair and deserved information. 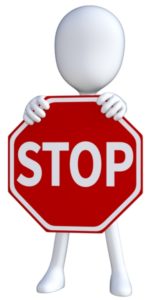 2.      Discern if it was verbal abuse or helpful, perhaps courageously given (because someone cares about you) information.  If you decide it is verbal abuse, say “STOP!” and walk away.  Note: verbal abuse often begins with You are followed by name calling, swearing or put downs.

3.      Acknowledge that you heard the criticism by saying, “Thank you for the information.”

4.      Give yourself supportive self-talk: Example: “This information is their opinion. I will listen.  I do not have to agree. Their opinion may help me in the long run. I will decide whether to accept their perspective or not. It is OK for me to make mistakes and learn from them.”

5.      Agree to any part of the criticism that is true and accurate.  Do not acknowledge the parts that are inaccurate. Here is an example; “Yes, I am late. I am late by 5 minutes.”

6.      Learn to say, “I will think it over,” rather than making a quick decision to make a change or deny the validity of the criticism.

7.      Apologize if you were in error, insensitive, inappropriate, or caused emotional disharmony or created a problem.

8.      Avoid defending yourself, counter attacking or adding your own critical comments.

9.      Later, if appropriate, report back to the critic if the information was helpful or not.

10.  In the end, use the kind of criticism and feedback you want to receive.

If you must criticize someone, please do so cautiously. There are often better ways than giving criticism to help others choose wise behaviors, correct their errors and move forward. Please consider them. For example, being the best role model you can is considered one the most effective ways to influence others’ behaviours.


People Boost: How to to Encourage Others’ Personal Strengths

Post Views: 375
It’s Time to Step Up Parents! How to Help Youth at Risk Not Feeling the Love? How the Five Love Languages Can Help

How Healthy Boundaries Can Protect Your Values

Are You Asking Effective Questions?