Be in Integrity at Work and in Life 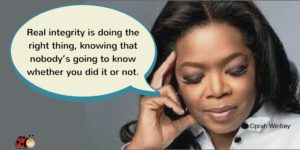 Self-accountability helps us operate in an ethical, responsible and authentic manner. The French playwright, Moliere, wrote,

It is not only what we do, but also what we do not do, for which we are accountable.”

Here is an excerpt from my book, From Woe to WOW: How Resilient Women Succeed at Work that speaks to integrity:

Align with Integrity at Work

The Merriam-Webster dictionary defines integrity as firm adherence to a code of especially moral or artistic values or incorruptibility.

In 2002, Time magazine’s “People of the Year” featured three women-of-integrity or, as the media headlines screamed, whistleblowers. Coleen Rowley, an agent at the Federal Bureau of Investigation criticized the FBI for ignoring evidence of terrorist plans before the September 11 attacks. Both Sherron Watkins of Enron and Cynthia Cooper of WorldCom reported fraudulent activity within their respective companies. These women just could not go to sleep at night without doing something that was in alignment with their values.

They all risked—both personally and professionally—the chagrin of colleagues and management by their actions. For each of them, the greater risk was in not acting and thereby losing integrity.

I have not been featured on the cover of Time magazine but, about ten years ago, I wrote a letter of resignation along with 12 recommendations which addressed 12 moral dilemmas that drove me out of the organization. A copy was forwarded to both the Director and the Board of Directors. I walked away believing I had done my part in naming what was unjust. My popularity within that agency plummeted to the bottom but I survived. I thrived.

In her book, Corporate Integrity: A Toolkit for Managing Beyond Compliance by Donna Kennedy-Glans defines integrity as the complete alignment of your intentions, commitments, and actions. She also offers an illuminating question to help make a decision:

Will my children and grandchildren appreciate my decision?”

In this context, acts of integrity can be as significant as proceeding with care when contemplating doing business in a country known for human rights violations or as small as reducing, reusing and recycling products. 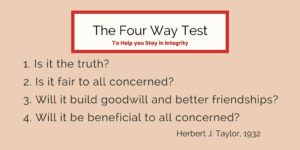 2. Is it fair to all concerned?

3. Will it build goodwill and better friendships?

4. Will it be beneficial to all concerned?

Anita Roddick, the creator of The Body Shop, shook the business world with her unorthodox practices. She made her company’s message clear through this line, “There are three billion women in the world and only eight that look like supermodels.” Not only did she challenge stereotypes of women’s beauty but involved herself in activism and campaigning for environmental and social issues. She gave her staff time off to volunteer and once said,

1. You gave in to peer pressure.

2. You spoke or acted with poor intentions driven by urges of greed, pride, envy, revenge or deception.

3. You had disturbing flashbacks and nightmares of what you said or did.

4. You stood by or hid when harm occurred to yourself, others or the environment.

5. You felt guilt or regret.

6. You felt a sickness or sinking in your stomach.

7. You noticed critical self-talk yelling at you internally.

8. You received little or no support from those you trusted for wisdom, compassion and thoughtful discernment.

9. You were glad that children or those you respect were not present.

10. You concluded you could save yourself by making amends.

In the end I hope you decide to remain in integrity at work and in life!

You Can Develop Resilience to Willpower Fatigue

Do You Know the Reasons to Volunteer?