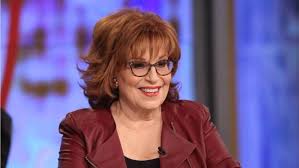 Now and then I watch the popular, some say feminist, some say b%$#ch fest, TV show, The View. It was launched in 1997 by the American broadcaster and journalist, Barbara Walters. Co-hosts included Meredith Vieira, Star Jones, Debbie Matenopoulos, and Joy Behar. Only Joy Behar, a feminist, comedian, writer, actor, and resilient woman remains.

Behar interests me for a number of reasons. She models some of the characteristics I am still developing. Yes, a woman in her seventies can continue to learn, develop and grow. Before I launch into my Joy Behar insights here is some background information.

Behar was born in 1942, which makes her four years older than me, and a good-fit role model. She grew up as an only child with working class, Italian parents. Behar is divorced and remarried, has a daughter and a grandson. After a short career as an English teacher, Behar entered show business. She was a producer of Good Morning America, appeared in The Vagina Monologues, has been a comedy club stand-up comedian, and had minor roles in a number of movies.

In addition to The View, she has been featured in The Joy Behar Show and then Late Night Joy. She has a compilation of her humorous quips in Joy Shtick — Or What is the Existential Vacuum and Does It Come with Attachments? and recently a book, which I have mixed feelings about reading, The Great Gasbag: An A-Z Study Guide to Surviving Trump World.

Here is what is noteworthy of Behar’s strengths and behaviours:

She shares her truth and this often rouses controversy. I have too often stayed silent when my ethical voice wanted to yell out. I want the guts to interrupt and scream, “I don’t like that!” or “That’s not ok! That’s crazy!” Behar does and she makes it clear what she likes and dislikes. Here are some of her statements:

At one time I taught women assertiveness training, helping them move to assertive rather than aggressive, passive or passive/aggressive behaviour. My style tends to be more passive–tentative and gentle. Yet, there are times I’d like to be more challenging in my approach. One of the other hosts said about Behar, “She carries a bold lip” as in:

I consider myself a feminist and have written about why I am comfortable with the label. I’d probably faint if I was given a tribute, as Behar did, by the feminist icon, Gloria Steinem, who said, “Joy has certainly moved the needle on feminism by being herself, by being on camera, by representing honesty.” Here are some examples:

While I have taken workshops on stand up comedy and crafted a few jokes, I’d like to respond more often with funny. Behar is a master at this:

Behar’s bold lip sometimes gets her in trouble. It’s powerful to use humor and often risky. I tell a story of when my marriage’s sex drive had gone flat, I picked my hubby up at the airport dressed like a hooker. One audience member wrote me a four-page letter telling me how I had triggered the deep pain of her husband leaving her for a prostitute. Regrettably, the woman who wrote the letter did not sign it so I could not have a discussion with her. I probably would not have apologized because I did not make her a target of my funny. I made my hubby and myself the targets. I still tell it.

If you are going to be spontaneous and/or funny you will offend someone. But in Behar’s case, she did target some individuals and she did apologize.

If you become curious and want to learn more about Behar, as I did, consider looking at Joy Behar’s Funniest Moments on The View.

Have I Told You I Remain a Feminist?
How do You Answer, “Are You a Feminist?”

Post Views: 465
Book Summary: Parenting With Eyes Wide Open How to Be Aware of the Stories We Tell Ourselves, Even at Work