We were forty-years-old when my hubby was transferred from Ontario to Calgary, Alberta. I felt excited to explore the employment opportunities in this dynamic city. After four months of job seeking, I was still unemployed. I was often home alone and the phone seldom rang from near or back home. Loneliness kicked in. Maybe it was depression or maybe in was both.

Now, I know I was longing for connection. I have heard the same lament, over the years, from clients, friends, and family members in different circumstances. Some people feel lonely because they do not have a main squeeze, a close friend, a trustworthy confidante, an understanding family, or a sense of community. Other people may feel lonely because their self-concept is poor and they imagine themselves not worthy of closeness. Yet others may feel lonesome because they are excluded at work or the community because of a disability, race, poverty, sexual orientation or for other reasons for which they are labeled different.

The Difference Between Alone and Lonely

However, recent research indicates too much alone time can lead to loneliness and social isolation for people with both extroverted and introverted preferences. You are at risk of loneliness when your longing for connection is unfulfilled. My risk factor is obviously higher than Les’. Consequently, I take feeling lonely seriously.

So does Britain. The British government created a Loneliness Minister and declared an annual Loneliness Awareness Week with the slogan Let’s Talk Loneliness.

In 2018, the American, Surgeon General, Vivek Murthy declared, “The world is suffering from an epidemic of loneliness.”

The Negative Consequences of Loneliness

Plus, there exists a stigma attached to saying “I feel lonely.” People, who feel lonesome, may imagine they are a failure or unworthy of a caring relationship.

All of these factors make it difficult for people who feel lonely to reach out for connection. As John T. Cacioppo, author of Loneliness: Human Nature and the Need for Social Connection wrote, “Real relief from loneliness requires the cooperation of at least one other person, and yet the more chronic our loneliness becomes, the less equipped we may be to entice such cooperation.”

The Cure to Loneliness Lies in Connection 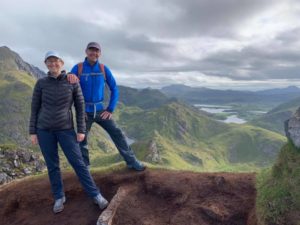 The present, and key, researcher of the 80-year old Harvard Study of Adult Development, Robert Waldinger, concluded: “The surprising finding is that our relationships and how happy we are in our relationships has a powerful influence on our health.”

The first step is to assess if feeling lonely has reached a point of concern. It is natural to feel lonely now and then. Certainly my situation was of concern. I was escaping into hours of sleep and questioning my worthiness.

“We can all slip in and out of loneliness. Feeling lonely at any particular moment simply means that you are human. . . Loneliness becomes an issue of serious concern only when it settles in long enough to create a persistent, self-reinforcing loop of negative thoughts, sensations, and behaviors.” John T. Cacioppo

Jaremka said, “A wealth of research shows that a sense of being cared for and loved is crucial to our well-being.”

So, where do we begin to minimize loneliness for others or ourselves? Here are some ideas to consider:

Do you wonder what happened to that lonely, miserable, 40-year old unemployed woman, me? I dug myself out! I reached out! I applied to volunteer at a family counselling agency and before I completed the training, I was offered a job. Yes, at the same agency! My relationships began to develop and I now flourish in a myriad of social interactions.

Loneliness need not lead to dismay, depression, illness or early death. Relationships are the cure! Go say “Hi, there!”

Book Summary: Words, Women & Wisdom The Why, Depth and Benefits of Friendship

How to Begin Healing Your Inner Child

Introspection: Are You Asking the Right Questions?

Healing from Betrayal: How to Forgive and Trust Again